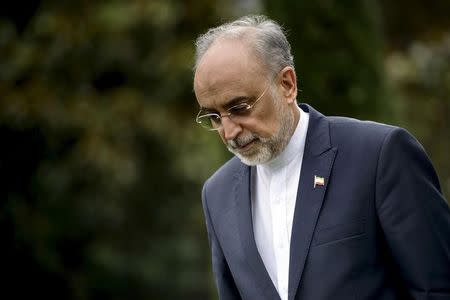 The Head of the Iranian Atomic Energy Organization Ali Akbar Salehi walks through a garden at the Beau Rivage Palace Hotel during an extended round of talks in Lausanne, April 2, 2015. REUTERS/Brendan Smialowski/Pool

* * * DUBAI (Reuters) - Iran has begun decommissioning uranium enrichment centrifuges under the terms of the nuclear deal struck with six world powers in July, Tehran's nuclear chief was quoted as saying on Monday during a visit to Tokyo.
"We have started the preliminary work" on implementing the agreement, Iran's Atomic Energy Organization chief Ali Akbar Salehi was quoted as saying by Japan's Kyodo news agency, adding that the measures include reducing the number of active centrifuge machines.
Under the July 14 agreement, Iran is to curb its nuclear program under United Nations supervision to ensure it cannot be used to make a nuclear weapon, in exchange for the removal of sanctions that have isolated Tehran and hobbled its economy.
In a separate development that appeared to confirm that implementation work had started, 20 hardline members of Iran's parliament wrote to President Hassan Rouhani to complain about dismantling centrifuges in two enrichment facilities at Natanz and Fordow.
"Unfortunately in the last two days some contractors entered Fordow and started dismantling centrifuges... they said they could finish the job in two weeks," Fars cited the lawmakers as saying.
Centrifuges spin at supersonic speed to increase the ratio of the fissile isotope in uranium. Low-enriched uranium is used to fuel nuclear power plants, Iran's stated goal, but can also provide material for bombs if refined much further, which the West has feared may have been Iran's latent goal.
Iran's highest authority, Supreme Leader Ayatollah Ali Khamenei, conditionally approved the deal last month, but the lawmakers said that beginning implementation so soon was against his directives.
(Reporting by Bozorgmehr Sharafedin; Editing by William Maclean and Andrew Heavens)
------
...

Iran to work on nuclear-powered boats after U.S. 'violation' of deal ...

Feature: Iranian scientists rely on ingenuity and smuggling to survive...

news.sciencemag.org 06/09/2015 Science
*** EBRAHIM MIRMALEK Iran is gearing up to build a national astronomy observatory with a 3.4-meter telescope here on the summit of Mount Gargash in ce...View Details»