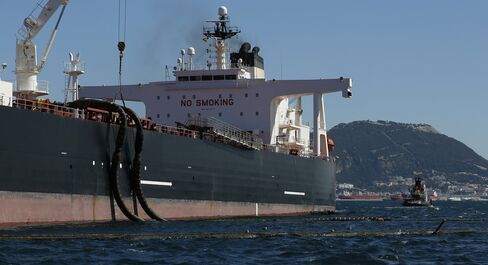 * * * Spanish refiner Cepsa offloads first tanker with Iranian crude
France and Romania await cargoes as Iran slowly ramps-up sales
The Monte Toledo oil tanker covered the uneventful voyage from Iran to Europe with a haul of one million barrels of crude in just 17 days, but its journey has been four years in the making.
On Sunday, the tanker became the first to deliver Iranian crude into Europe since mid-2012, when Brussels imposed an oil embargo in an attempt to force the Middle Eastern nation to negotiate the end of its nuclear program. The ban was lifted in January as part of a broader deal that ended a decade of sanctions.
The 275-meter tanker started offloading its cargo into a refinery owned by Cia. Espanola de Petroleos, near Algeciras, a few miles from Gibraltar. By midday, the vessel had already pumped to shore about a fifth of its cargo.
In southern Spain, the tanker’s arrival was met with little fanfare. It was a quiet Sunday at the refinery, and for the workers, the Monte Toledo is just one of the eight or so vessels they expect to receive this month. By the time the refinery has taken in all the Iranian crude, another tanker from Algeria will be already waiting.
Nonetheless, there’s a wider significance. As the Monte Toledo started to pump to shore through two 21-inch floating hoses connected to a giant buoy and a 1.8-kilometer submarine pipeline, Iranian President Hassan Rouhani declared in Tehran that more oil exports “will be added soon.”
Around Europe, other tankers with Iranian oil are close behind the Monte Toledo. In February, 29 vessels loaded crude from the Middle Eastern nation, according to data compiled by Bloomberg. Of them, three are heading toward Europe -- the Eurohope tanker is sailing to Constanta, an oil port in Romania, and the Atlantas is on its way to France. Another one, the Distya Akula, is anchored at the mouth of the Suez Canal, and is likely to head into a Mediterranean port.
The Monte Toledo and its companions are the vanguard in the return of Iran into the European oil market. Petro-Logistics SA, a Geneva-based tanker-tracking firm, estimated Iran exported in February about 1.4 million barrels a day, up 350,000 barrels a day from the average 2015 level.
Although the increase falls short of the 500,000 barrels a day that Tehran had promised, there are signs that exports into Europe will pick up this month.
"It does take a while to get those fields back up," said Petro-Logistics director Daniel Gerber. "But I think they’re going to hit the increase of 500,000 barrels a day in March.”
Seth Kleinman, head of energy research at Citigroup in London, agreed, saying that in addition to higher export volumes this month, more countries were buying.
"You see tankers going to Spain, Romania, Tanzania, France and the U.A.E. You got an uptick to India in February too," he said.
Still, hurdles remain. Lingering banking restraints mean some customers are finding it hard to transfer payments for Iranian crude and the National Iranian Oil Co. has offered to swap crude for gasoline to get deals done, according to local reports.
Iran will want to win back customers in Europe, where Russia, Saudi Arabia, Iraq and other rival suppliers stepped in after the embargo was imposed. Tehran also faces a rival unknown four years ago: the U.S. has started exporting crude and companies such as Exxon Mobil Corp. are shipping American Crude into refineries in the Mediterranean.
Before the embargo Europe imported on average about 400,000 barrels a day of oil from Iran, according to the International Energy Agency. Cepsa alone was buying about 60,000 barrels a day. Total SA was among the biggest buyers and the French company is waiting to receive the Atlantas tanker later this month in its refinery in Le Havre. Other European top buyers in past, including Repsol SA, Eni SpA and Hellenic Petroleum SA, have yet to purchase any.
If all goes as Tehran has planned, the Middle Eastern country will boost its production back to the 3.6 million barrels a day it pumped in 2011. After the European embargo was imposed and the U.S. tightened other sanctions, Iranian oil production dropped to about 2.8 million barrels a day.

---The Monte Toledo oil tanker covered the uneventful voyage from Iran to Europe with a haul of one million barrels of crude in just 17 days, but its journey has been four years in the making. ---
...

bloomberg.com 29/03/2015 Economy
by Javier Blas 3:31 AM IRDT March 30, 2015 Part of an oil and methanol installation is seen on Kharg Island in the Persian Gulf off the coast of Iran...View Details»