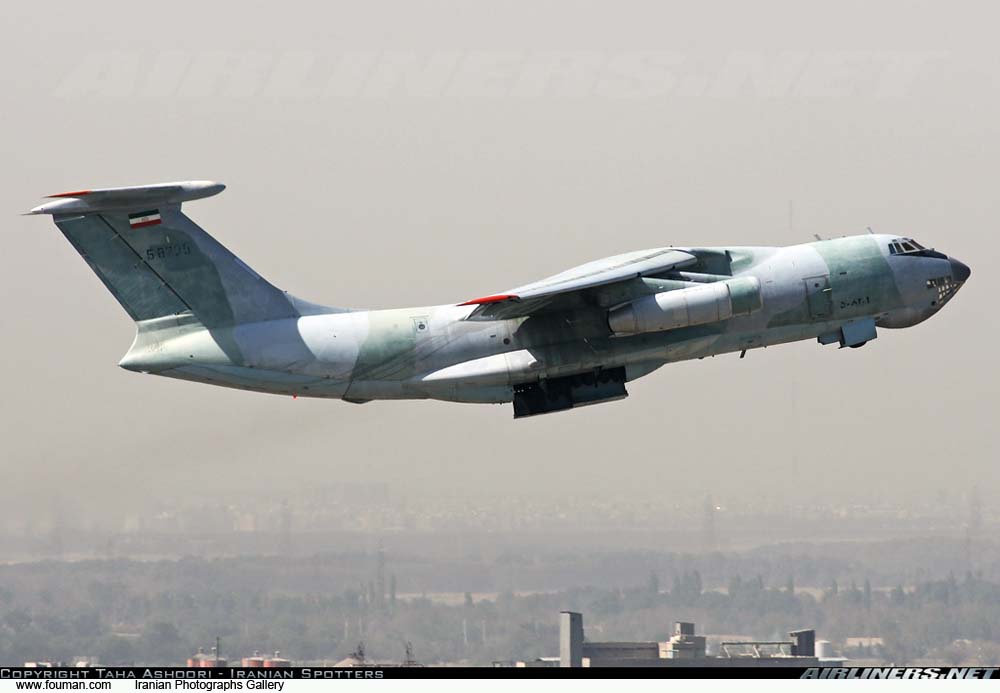 (Wikipedia) - The 2009 Iranian Air Force Ilyushin IL-76MD accident of September, 22 2009 resulted in the destruction of Iran's only functional Airborne Warning and Control System (AWACS) aircraft, an Ilyushin IL-76MD. Sources conflict on the cause of the loss, with some stating that there was a mid-air collision with an Iranian Air Force Northrop F-5E Tiger II or a HESA Saeqeh, and others stating that the Rotodome detached from the aircraft, striking and removing the tailplane while the aircraft was maneuvering for an emergency landing following an engine fire.
A military parade was held in Tehran on September, 22 2009 to mark the anniversary of the start of the 1980–1988 Iran–Iraq War, and was a send-off for President Mahmoud Ahmadinejad who was to give a speech at the United Nations General Assembly in New York on September, 23rd. A fly-past by the Iranian Air Force was part of the parade involving the AWACS-equipped Ilyushin-76MD as well as Northrop F-5E Tiger IIs and HESA Saeqeh aircraft.
Sources vary on the cause of the accident. Some state that a fire developed in one of the engines, and that the radar dome detached from the aircraft while attempting to make an emergency landing on runway 29L at Tehran's Mehrabad International Airport. The detached radar dome struck the tail fin, removing it and caused loss of control which led to the aircraft crashing. Other sources state that the IL-76MD and one of the escorts collided in mid-air over Behesht Zahra .
The Ilyushin subsequently crashed in flames at Varamin, killing all seven crew members on board. Some reports state that no Mayday call was made, indicating a sudden event whilst other reports indicate that there was an emergency call from the aircraft with the pilot reporting an engine fire and calling for emergency landing authority. The accident was initially reported on the Islamic Republic News Agency (IRNA) website, but was withdrawn 5 hours later. A video of burning wreckage from the military aircraft surrounded by fire trucks was also shown on state TV. However, president Ahmadinejad made no mention of it during his speech at the parade.
A video of the crash appeared on YouTube on June,3 2011, showing the stricken IL-76MD with its rear fuselage missing, spiraling down out of control and then impacting the ground. The scene was captured in the background of a video made while filming an in-flight refueling operation between two unrelated aircraft at the air show.
The aircraft involved was an Ilyushin Il-76MD, a Soviet-built transport aircraft, later converted to an AWACS system for the Iraqi Air Force called the Adnan-2 class AWACS. It had been flown from Iraq to Iran in 1991 during the First Persian Gulf War, given serial number 5-8209 and renamed from "Baghdad" to "Simorgh" (a flying creature of Iranian fable which performs wonders in mid-flight). After arrival in Iran, Russian technicians had reportedly upgraded the aircraft and installed newer Iranian-made radar, which could trace flying objects within a 1,000 kilometers range. The aircraft came into service in April 2008 and was the only AWACS-equipped Iranian aircraft....

Don’t mess with us, Daesh: Iran parades its military might with coded ...

dailymail.co.uk 23/09/2014 Military
Don’t mess with us, Isis: Iran parades its military might to mark anniversary of its Islamic revolution with coded message to terror group on its bord...View Details»