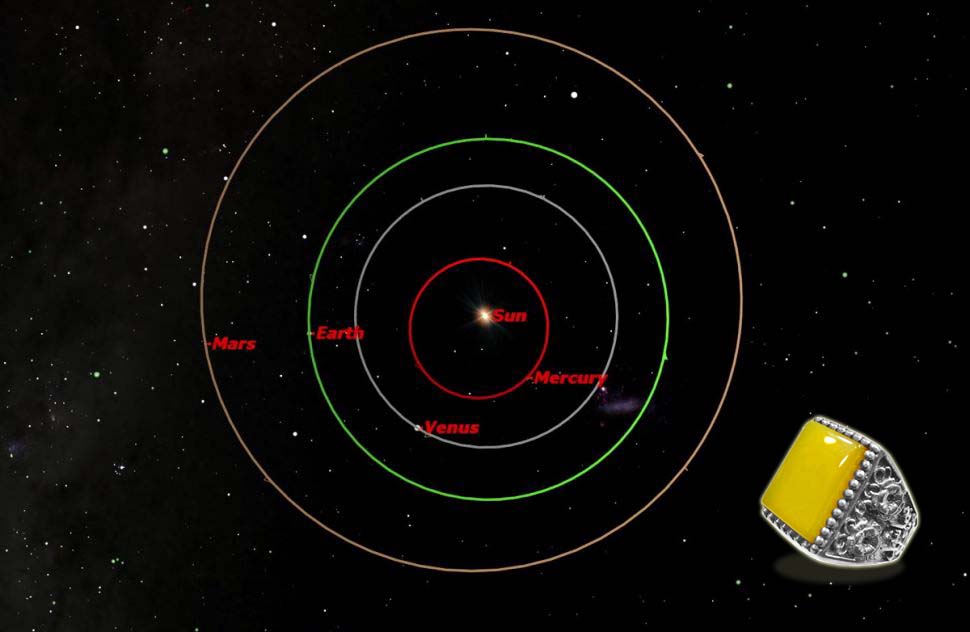 Today April, 8, 2014 the planet Mars is exactly opposite the sun in the sky in a rare cosmic alignment, an uncommon phenomenon that takes place every 778 days (2 years, 1 month and 18 days). But what makes this event very special this year is the fact that it falls on the Farvardin, 19th 1393 according to Iranian Solar Calendar a day which is called Farvardingan for Sharafolshams.

* * * Sharafolshams is the name of a special Iranian jewelry; a yellow Agate inscribed on 19th Farvardin (April, 8th) believed to bring good luck when carried on as a ring or necklace. Aka Sharafashams, the stone gets its power from Prophet Khezr (Khidr)

Print the full Sharafalshams Dua (Prayer) and astrology signs on paper and put your names and loved ones on it on 19th Farvardin for health & protection.

* * * The term Sharafolshams also known as Sharafoshams, Sharaf Al Shams, or Sharafe Shams is comprised of two words; Sharaf meaning ï¿½honorï¿½ and Shams which means ï¿½the sunï¿½, from which we can literally translates the word to ï¿½In honor of the Sunï¿½.

The Sharafolshams stone has special symbols and numbers engraved at the back (or on either side of the stone, with just one stroke); these powerful symbols are supposed to be engraved at a certain time of the year for only one day and night called Kammar al akrab (The moon in scorpion), thus this stone is very powerful for the benefit of the person who wears it.

* * *
Made of Yellow Agate (Aqeeq), Sharaf Al-Shams is naturally yellow just like the sun and has a special place for religious people. Although the belief and culture behind Sharafolshams may be traced to Mithraism as the day coincides with one of the ancient Iranian festivities called Farvardingan celenrated by Zoroastrians, although Sharafolshams now has a special place among Shia Muslims. People who wear Aqeeq get long life, family happiness, and prosperity, absorbing the rays of the sun and passing them onto the body thus resulting in good health.
These celestial events must be taken seriously, Farvardingan is the day to remember pure souls (Farvahar) as the day descend upon earth.

* * * Make a wish and order your unique Sharaf-e shams stone (in your name) today to be inscribed next year on the same date. Itï¿½s also possible to write Sharafolshams on paper. Itï¿½s basically 5 names of God, these are: Allah,
Jamil, Rahman, Momen and Nour. These are written in a certain form using symbols that have the same meaning which come from Quran, Torah and Bible. According to original instructions, itï¿½s better to use yellow ink (can be obtained by mixing Saffron & Rosewater) The person who writes it must have good qualifications and should have performed the Wudu (the Islamic procedure for washing parts of the body using water, typically in preparation for formal prayers)
Mars-Earth-Sun Align on Sharafolshams
Reserve your magical Sharafoshams stone at artemisia.ir today. Limited number of Sharaf al Shams Agates for rings and necklaces are available. To purchase original Sharafe Shams:
http://artemisia.ir/en/oriental-design-items/55-sharaf-e-shams-rings.html
...

Trip to Half of The World: Isfahan 2015, Ancient Capital of Persia Sho...

10 Best Iranian Artists and Where to Find them...

theculturetrip.com 11/11/2014 Arts
10 Best Iranian Artists and Where to Find them Iran has had a turbulent political history, but the country’s situation has not been an obstacle to the...View Details»