* * * China and Iran have close diplomatic, economic, trade and energy ties, and China has been active in pushing both the United states and Iran to reach agreement on Iran's nuclear programme.
Under the multilateral deal, agreed in July, sanctions imposed by the United States, European Union and United Nations will be lifted in return for Iran agreeing to long-term curbs on a nuclear programme that the West has suspected was aimed at creating a nuclear bomb.
"China and Iran find mutual benefits in many areas," Iranian foreign minister Mohammad Javad Zarif told his Chinese counterpart, Wang Yi, at the beginning of a meeting in Beijing. 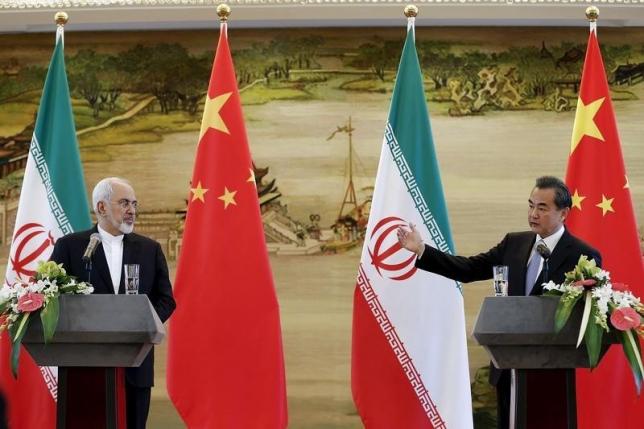 China is the biggest customer of Iranian oil and Zarif said their economies were "complementary". The two countries faced "similar challenges as well as opportunities", he said.
"I agreed with Minister Wang Yi that we share similar views on regional issues, which should be solved in a political way. We would like to cooperate with China on issues in Yemen, Syria and the Middle East, seeking a political solution," he said.
China has traditionally been a low-key diplomatic player in the region, despite its reliance on its oil, calling for negotiated settlements and decrying threats or the use of force.
"We both agree that the unrest in West Asia and North Africa regions is not sustainable, it should be solved in a political way and we should seek a solution that can address the concerns of different parties," Wang said.
Zarif thanked China for its role in the nuclear talks.
"After the agreement is implemented, illegal sanctions imposed upon Iran by Western countries will be lifted, a lot of Chinese companies will have more chances to cooperate with Iran," he said.
China had long objected to unilateral sanctions imposed on Iran by the United States and Europe, though it has supported UN ones, and had denounced threats of force.
Wang said China would fulfil its promises and play an active and constructive role in implementing the nuclear agreement.
In July, Chinese president Xi Jinping told US president Barack Obama that China would work with the United States and others to ensure the implementation of the agreement. Xi visits the United States later this month.
---Iran wants China's help to resolve tensions and unrest in the Middle East and is ready to play host to more Chinese firms once sanctions against it are lifted, Iran's foreign minister said on Tuesday---
...