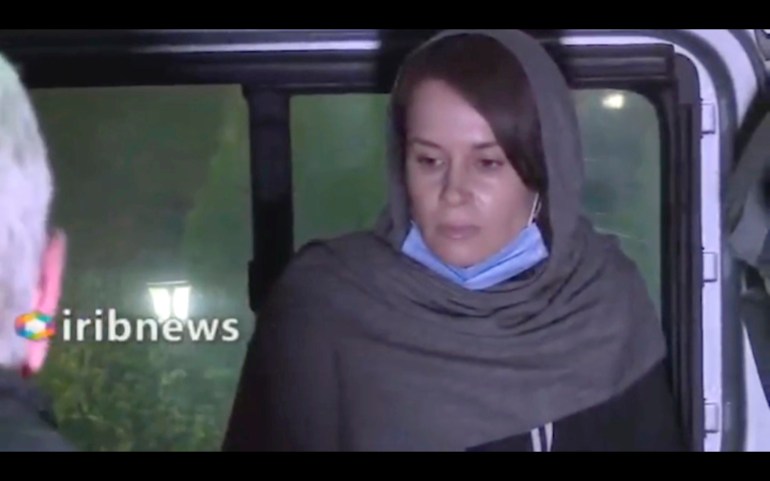 Iranian state broadcaster shows images of Moore-Gilbert entering a van and of three released Iranians being welcomed home.
By Maziar Motamedi
25 Nov 2020
Tehran, Iran – Iran has swapped jailed British Australian academic Kylie-Moore Gilbert with three unnamed Iranians held abroad, according to state media.
Footage released by state broadcaster IRIB on Wednesday showed Moore-Gilbert, who had been imprisoned for more than two years, entering a van.
Separate images showed celebrations erupting as the freed Iranians, described as “traders” who were arrested “outside the country on false charges” entering a room packed with people. Deputy Foreign Minister Abbas Araghchi appeared to be among members of the welcoming party.
A Cambridge-educated Middle East scholar, Moore-Gilbert was arrested in September 2018 in the Iranian capital, Tehran, and given a 10-year sentence for espionage.
Last month, she was shifted from the Qarchak women’s prison to the Evin prison in Tehran, where conditions are thought to be marginally better.
The move came after two senior judiciary officials visited Qarchak and reportedly spent hours talking to prisoners about their conditions. The women’s prison, located outside Tehran, has been blacklisted under United Nations human rights sanctions.
According to the IRIB, the 33-year-old Moore-Gilbert was scouted by Israeli intelligence agencies who trained her for a mission in Iran.
She allegedly made no moves during a first trip to the country, but tried to obtain “Iran’s economic and military information” during a second trip, after which she was arrested.
Moore-Gilbert has reportedly denied the accusations against her. The Australian government has also rejected the allegations as baseless.
Moore-Gilbert’s release comes less than two months after French-Iranian academic Fariba Adelkhah, imprisoned in Iran since June 2019 on charges of conspiring against national security, was temporarily released from prison.
British Iranian Nazanin Zaghari-Ratcliffe, arrested in April 2016 and sentenced to five years in jail after being convicted of plotting to overthrow Iran’s establishment, was also temporarily released from prison in late March.
On Tuesday, Iranian-Swedish academic Ahmadreza Djalali, who was handed a death penalty three years ago for spying after being arrested in 2016, reportedly called his wife from prison to inform her that he could be executed soon.
That prompted Swedish Foreign Minister Ann Linde to call her Iranian counterpart Mohammad Javad Zarif to protest, a move that was rejected by Iran as interfering with processes of an “independent judiciary”.
Iran does not formally recognise dual nationality status.
--- ---...

Concerns mount for human toll after US blacklists Iran’s banks ...
aljazeera.com 10/10/2020 Economy
While the Trump administration insists that sanctions do not interfere with the flow of humanitarian goods, critics in Iran and outside of it are push...View Details»