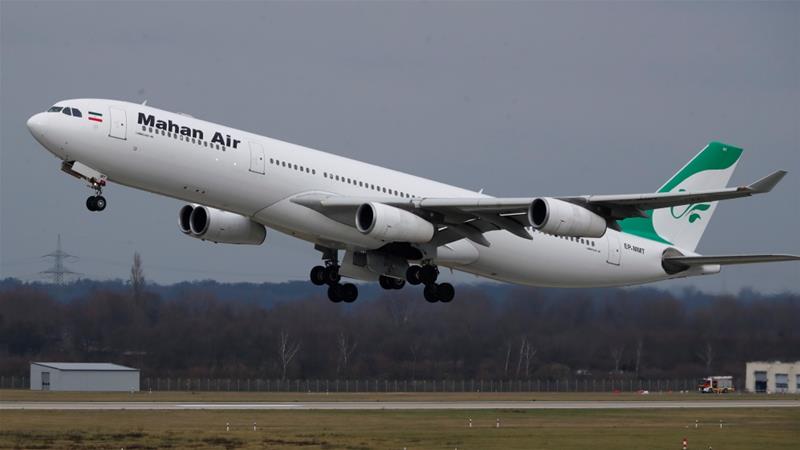 Iran media says Mahan Air pilot forced to drop altitude to avoid collision with F-15 jet, injuring several passengers.
Several passengers on an Iranian airline have been injured over Syria after the pilot changed altitude to avoid collision with a US fighter jet, according to Iranian media, but the United States military said its F-15 kept a safe distance.
The Iranian plane, belonging to Mahan Air, was heading from Tehran to Beirut on Thursday when the pilot staged a safety manoeuver, in an incident that Iran's Foreign Ministry said would be investigated.
Iran's official IRIB news agency quoted a passenger describing how his head had hit the roof of the plane during the change in altitude, and video showed an elderly passenger sprawled on the floor.
"I don't know what happened. A black plane came close to our plane and our plane lost its balance. I was sprung up and my head was banged against the ceiling," the unnamed passenger told IRIB.
Another said: "It was a fighter jet. A fighter jet was literally sticking to our plane. We lost balance and bounced up and down."
All the passengers left the plane, some with minor injuries, the head of the Beirut airport told Reuters News Agency. The plane arrived back in Tehran in the early hours of Friday, the Fars news agency reported.
The incident comes amid tensions between Tehran and Washington, with ties deteriorating since 2018 when US President Donald Trump exited Iran's 2015 nuclear deal with six world powers and reimposed sanctions that have battered Iran's economy.
'Visual inspection'
The pilot of the passenger plane contacted the jet pilots to warn them to keep a safe distance and they identified themselves as American, IRIB reported.
The US military's Central Command, which oversees American troops in the region, said the F-15 aircraft was conducting a visual inspection of the Iranian aircraft when it passed near the Tanf garrison in Syria where US forces are present.
Captain Bill Urban, the senior Central Command spokesman, said the F-15 "conducted a standard visual inspection of a Mahan Air passenger airliner at a safe distance of about 1,000 metres (3,280 feet) from the airliner this evening".
"The visual inspection occurred to ensure the safety of coalition personnel at Tanf garrison," Urban said. "Once the F-15 pilot identified the aircraft as a Mahan Air passenger plane, the F-15 safely opened distance from the aircraft."
He added the intercept was carried out in accordance with international standards.
Aircraft at that altitude are to maintain a distance of at least 600 metres (2,000 feet) to ensure they do not hit each other, though planes travelling that close together can encounter wake turbulence.
Data from the flight recorded by website FlightRadar24.com showed the airliner climbed from 34,000 feet to 34,600 feet in under two minutes around the time of the incident, then dropped back down to 34,000 feet within a minute after.
Granular data from 16:10 to 16:20 UTC from IRM1152. A climb from 34,000 to 34,600 feet between 16:13:53 and 16:14:32, then descent back to 34,000 feet by 16:15:29. pic.twitter.com/dQSpPvB4vV
— Flightradar24 (@flightradar24) July 23, 2020
"What the Pentagon hasn't said is why they sent up an aircraft to look at this passenger plane whereas other passenger planes ply this route and they haven't been intercepted in the past," said Rodger Shanahan, a research fellow at the Lowy Institute for International Policy in Sydney, Australia.
He noted the US and Israel have long accused Mahan Air of transporting weapons to Iran-backed armed groups in Syria. "That may well have been one of the reasons why the US chose to take a closer look at the aircraft to check whether there were passengers on board," he told Al Jazeera.
The US imposed sanctions on Mahan Air in 2011, saying it provided financial and other support to Iran's elite Revolutionary Guard Corps.
Following the incident, Iran's Foreign Ministry sent a protest note was sent to the Swiss Embassy, which represents US interests in Iran, warning that if any accident happens on the plane's return flight to Tehran, it will be the US's responsibility.
The ministry's spokesman, Abbas Mousavi, said Iran is investigating the incident, adding that the country would take necessary legal and political actions.
--- ---
...