71 Years of Nakba: Palestinians Continue to Suffer 'The Catastrophe' 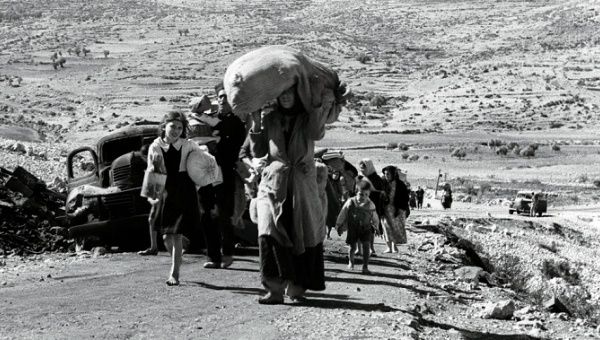 
Nakba or catastrophe is not just an event of history but an "ongoing process aimed at the erasure of Palestinian memory and history."
Palestinian villagers expelled from their village in 1948 after the creation of Israel. | Photo: Reuters

* * * “The memory of the Nakba …We salute it with our tears and suppress our pains and our sins. We salute it on the same day that Israelis commemorate the establishment of their state. Starting from the ashes of the Nakba to the battle to stay on our land in order to preserve our heritage and identity, and to confront a series of authoritarian and racist laws,” wrote Palestinians poet Dareen Tatour about Nakba.
Nakba, or catastrophe in Arabic, is commemorated every year a day after Israel celebrates their "independence" on May 14.
While Israelis are celebrating their apparent independence from Britain, Palestinians are still mourning the loss of their lands, homes, identity, and country 71 years ago.
This year's Nakba comes as Israel is dolled up for Eurovision, a song contest engulfed in protests for whitewashing the country's war crimes by being held in Tel Aviv. Adding insult to injury, the European contest started on the same day that Palestinians lost everything.
This day also marks the first anniversary of the shift of the U.S. embassy to Jerusalem from Tel Aviv in a bid to recognize Jerusalem as the capital of Israel by the far-right U.S. President Donald Trump.
On May 14, 2018, the U.S. inaugurated its embassy in Jerusalem proving once again Trump’s pro-Israel bias which he intensified subsequently by recognizing occupied Golan Heights as Israeli territory earlier this year, and as details of his “deal of the century” for the Palestinian-Israeli conflict continue to be leaked. 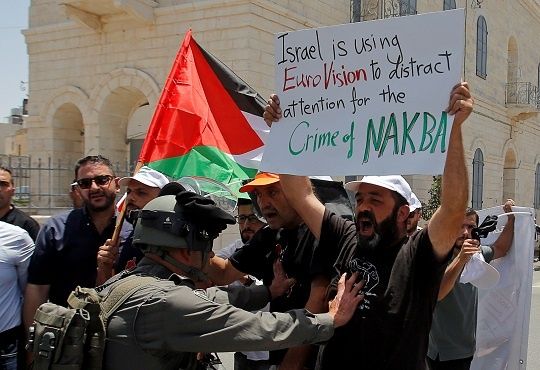 A Palestinian demonstrator holds a placard during a protest marking the 71st anniversary of the 'Nakba', or catastrophe, and against Eurovision Song Contest hosted by Israel, in Bethlehem in the Israeli-occupied West Bank. | Photo: Reuters

* * * Trump’s Middle East peace plan commonly referred to as the “deal of the century” revealed a plan for a two-state solution which includes the creation of “New Palestine.”
This new Palestine will not be allowed to have an army, share Jerusalem as the capital of both countries and all the illegal settlements in West Bank will be part of Israel meaning leaving the occupied people with less than what they already had, reaffirming the idea that Israeli theft and colonialism has continued undaunted since Jewish state started seizing their lands in 1948 known as Nakba.
Nakba day is commemorated in memory of the 1948 Arab-Israeli war that led to the establishment of the Israeli state at the expense of Palestinians. Hundreds of thousands of Palestinians were forced out of their homes and land.
However, the origins of Nakba began two centuries prior to 1948 according to an Al-Jazeera documentary.
In 1799, Napoleon Bonaparte besieged the city of Acre in a bid to defeat Ottomans and establish the French regime in the regions. Napoleon wrote a letter to the Jews under French protection offering them Palestine as their homeland and asked them to “rise up” against their “oppressors.”
Napolean was later defeated but his idea of Palestine as Jewish homeland was picked up by the British years later.
British colonized Palestine in 1917 and withdrew on May 1948. The country’s foreign secretary Arthur James Balfour had issued a secret promise in 1917 “to favour the establishment in Palestine of a national home for the Jewish people.” The colonial power worked towards the promise during its reign.
Encouraged by Britain, Jewish people immigrated to Palestine en masse. In April 1936, the local Palestinians started a national strike against the immigration and Britain’s alliance with the Zionist movement.
They were met with force which killed over 190 Palestinians during six months of the strike. Palestinian leaders, bowing to pressure from Arab leaders, ended the strike and met the British Royal Commission of Inquiry headed by Lord Peel. 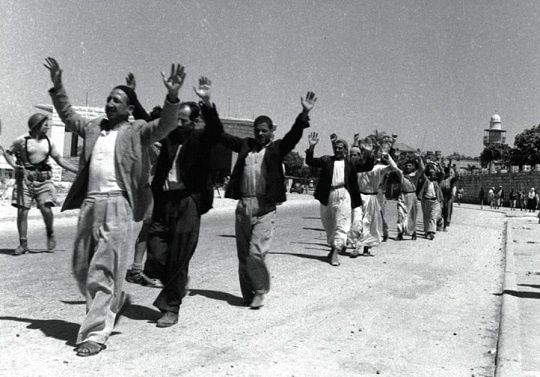 Palestinian residents of the town of Ramle raise their hands in surrender to Israeli soldiers on July 11, 1948. | Photo: Reuters

* * * Later, the Peel Commission recommended partitioning Palestine and establishing a Jewish state.
The Palestinians revolted and between 1936-1937, the British murdered over 1,000 protesters.
In 1947 the Palestine issue was referred to the United Nations whose General Assembly devised a plan of partition dividing Palestine into two states. According to the plan, the Jewish state was to be given 56 percent of Palestinian land.
After the resolution was passed, the U.K. withdrew from Palestine on May 14, 1948 which Israel celebrates as their “independence” day.
What ensued after the “independence” was ethnic cleansing, seizing more lands from Palestinians. By the end of July 1948, 400,000 Palestinians had been forced out of their homes, towns and villages.
Over seven months, the number doubled to 800,000 Palestinians. Israel also destroyed 531 villages and depopulated 11 neighborhoods.
Israeli historian Ilan Pappe called it a crime against humanity.
Palestinian activists and academics, as well as the Palestinian leadership, blame colonial Britain for the apartheid that ensued after the foundation of Israel which is still forcing Palestinians out of their rightful homes through illegal settlements in the West Bank and previously in Gaza.
While the U.N. resolution 194 of 1948 granted the rightful return of all Palestinians to their homes, Israel has publically refused to abide by it for decades.
Israel, despite the Oslo accords in the 1990s which included the agreement to establish a Palestinian nation within two years and the right of return of the refugees, has so far frustrated all efforts of peace talks through the refusal to abandon its colonial settlement building in the West Bank and instead using the post-Oslo Palestinian authority as a policing force for the occupation.
Decades of Israeli occupation expansion and disregard for Palestinian rights in the West Bank and Gaza, which is home to the biggest Palestinian refugee population while having been under Israeli military blockade for more than a decade, ignited the 'Great March of Return' in Gaza in 2018 which killed over 200 Palestinians over the last year.
These are the reasons why Nahla Abdo and Nur Masalha in their edited book, “An Oral History of the Palestinian Nakba,” published in 2018 pointed out that Nakba is not an event of history, it is a continuous process.
“Drawing together Palestinian accounts from 1948 with those of the present day, the book confronts the idea of the Nakba as an event consigned to the past, instead revealing it to be an ongoing process aimed at the erasure of Palestinian memory and history,” the book’s publication house rightly wrote.

A Symbolic Vote in Britain Recognizes a Palestinian State ... 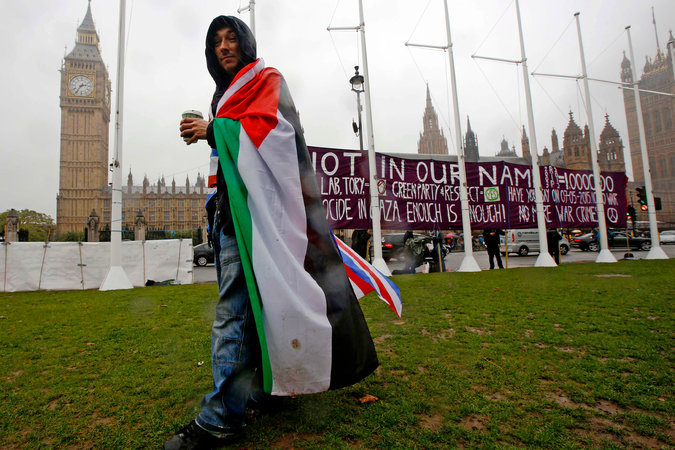 nytimes.com 14/10/2014 News
By STEPHEN CASTLE and JODI RUDORENOCT. 13, 2014 LONDON — Against a backdrop of growing impatience across Europe with Israeli policy, Britain’s Parliam...View Details»