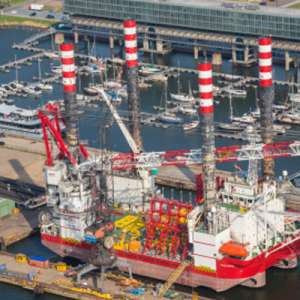 Tuesday, 21 April 2015 - 8:27pm IST | Place: New Delhi | Agency: PTI
Indian firms have so far shied away from investing in Iran for the fear of being sanctioned by the US and Europe.
With easing of Western sanctions against Iran in sight, India has made a renewed pitch to get rights to develop ONGC-discovered Farzad-B gas field in the Persian Gulf.
A high level delegation compromising of officials from the ministries of finance and petroleum as well as executives from ONGC Videsh and Mangalore Refinery and Petrochemicals Ltd (MRPL) visited Tehran last week to re-engage with Iran.
The talks centered on getting development rights to the Farzad-B gas field in the Farsi block as well as on the possibilities of setting up gas-based petrochemical/urea plant in Iran, sources privy to the development said.
Iran had earlier this month reached a framework nuclear agreement with the six world powers, spurring hopes of a final deal by June end that could lead to the lifting of economic sanctions.
Indian firms have so far shied away from investing in Iran for the fear of being sanctioned by the US and Europe.
Sources said that besides getting rights of the Farzad-B field, discussions focused on putting up petrochemical projects especially in Asalouyeh Special Economic Zone and Iran's southeastern port city of Chabahar.
ONGC Videsh Ltd, the overseas arm of state-owned Oil and Natural Gas Corp, had in 2008 discovered the Farzad-B gas field in its Farsi exploration block in the Persian Gulf.
In August/September, 2010, it submitted a revised Master Development Plan (MDP) for producing 60 per cent of the 21.68 trillion cubic feet of in-place gas reserves but had not signed the contract because of threat of being sanctioned by the US which is against any company investing more than USD 20 million in Iran's energy sector in any 12-month period.
Iran, in February 2012, issued a one-month ultimatum to the OVL-led consortium over the development of a gas field.
For more than two years, it did not carry out the threat of cancelling allocation of the Farsi block to OVL.
To pressure India to act, Tehran last year put the field on the list of blocks it wants to auction in future, sources said adding it has however not yet cancelled OVL's exploration license for the Farsi block which gives it the right to develop the discoveries it has made.
OVL is the operator of the Farsi block that lies north of Qatar. It has 40 per cent interest in the 3,500 sq km block. State refiner Indian Oil Corp (IOC) too has 40 per cent stake, while the remaining 20 per cent is with Oil India Ltd (OIL).
The Farzad-B gas field may hold an estimated 21.68 Tcf of in-place reserves, of which 12.8 Tcf can be recovered. The reserves in Farzad-B are almost thrice the largest gas field in India.
Sources said also figuring during discussions was the issue of India's import of Iranian oil, which has fallen from 18.5 million tons in 2010-11 to under 11 million tons in 2014-15.
Tehran wants India to step up imports.

parstoday.com 22/05/2016 Economy
India has made first euro payments to Iran in four years to clear part of its $6.4-billion oil debt ahead of Prime Minister Narendra Modi's visit to T...View Details»