Photo: A baby lowland gorilla rides on his mother's back at the primate sanctuary run by the Cameroon Wildlife Aid Fund in Mefou National Park, just outside the capital Yaounde (Reuters / Finbarr O'Reilly) 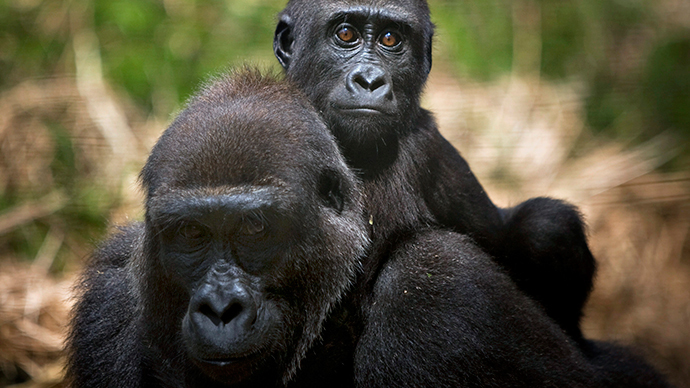 The world’s wildlife populations, including mammals, birds, reptiles, amphibians and fish, have dropped by more than half in the last 40 years, the World Wildlife Fund’s (WWF) said in its latest report.
“Put another way, in less than two human generations, population sizes of vertebrate species have dropped by half,” Director General of WWF International Marco Lambertini said in a statement.
The WWF released its Living Planet Index (LPI) report on Tuesday, published every two years.

After measuring more than 10,000 representative populations of mammals, birds, reptiles, amphibians and fish between 1970 and 2010, WWF concluded that the populations of those species have dropped by 52 percent.
This year’s release marks a huge decline in comparison to previous report, which revealed a drop of 28 percent between 1970 and 2008.
“We should feel a strong sense of urgency because we have to really deal with these issues in the next few decades,” Lambertini said. “We are using nature’s gifts as if we had more than just one Earth at our disposal. By taking more from our ecosystems and natural processes than can be replenished, we are jeopardizing our very future.”

Largest ecological footprints left by Kuwait, Qatar, UAE, US
The report found that Kuwait had the worst record in the past four decades, with the most resources consumed and wasted per head of any country, followed by Qatar and the United Arab Emirates.
The US also has a bad track record, with the report noting that “if we lived the lifestyle of a typical resident of the USA, we would need 3.9 planets.”

Other countries that left one of the worst ecological footprints included Denmark, Belgium, Trinidad and Tobago, Singapore, Bahrain and Sweden.
Some of the poorer countries had better sustainability results, including India, Indonesia and the Democratic Republic of Congo.
In terms of species, the biggest fall was reported among the populations of freshwater fish, down by 76 percent over the last four decades, the report stated. A view of the commercial center on Martyrs street in Kuwait city. (Reuters/Jamal Saidi)
The loss of natural habitats, excessive hunting and fishing, as well as climate change were some of the main reasons behind the overall decline.
Also, WWF said that the Earth has crossed three of out the nine identified "planetary boundaries,” which are “potentially catastrophic changes to life as we know it,” including biodiversity, carbon dioxide levels and nitrogen pollution from fertilizers.
Another two are currently in danger of being crossed: ocean acidification and phosphorus levels in fresh water.
"Given the pace and scale of change, we can no longer exclude the possibility of reaching critical tipping points that could abruptly and irreversibly change living conditions on Earth," the report said.
Lambertini remains hopeful though, urging public and private sectors to act and search for ways to protect the environment.
“The upcoming generation can seize the opportunity that we have so far failed to grasp, to close this destructive chapter in our history, and build a future where people can live and prosper in harmony with nature,” Lambertini said.

“Things look so worrying that it may seem difficult to feel positive about the future. Difficult, certainly, but not impossible – because it is in ourselves, who have caused the problem, that we can find the solution.”
---The world’s wildlife populations, including mammals, birds, reptiles, amphibians and fish, have dropped by more than half in the last 40 years, the World Wildlife Fund’s (WWF) said in its latest report.---
...