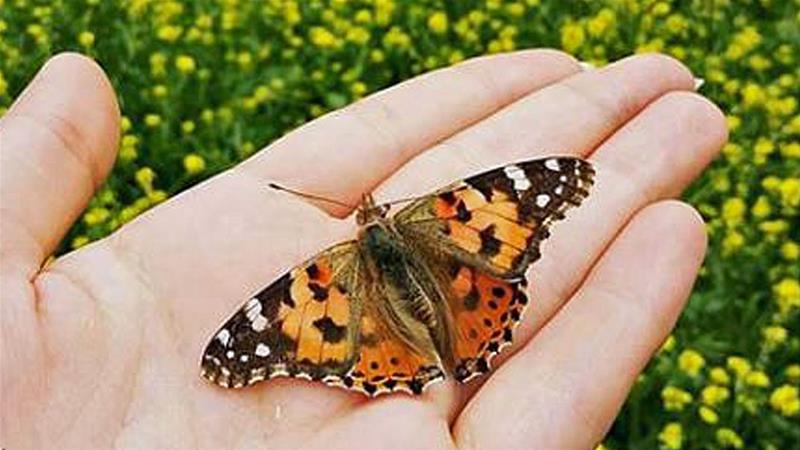 The migration has helped elevate the public mood amid rising tensions between Washington and Tehran.
by Saeed Jalili
Vanessa cardui, also known as the Painted Lady [Al Jazeera]

* * * Tehran, Iran - Maryam Moghadam was deep in thought as she stepped out of her home to walk to work last week; there was a lot on her mind, the recent worry shared by many Iranians about US sanctions and rising regional tensions adding to that.
But as she walked down the verdant Keshavarz Boulevard in central Tehran, something caught her eye. The air was filled with beautiful little butterflies, their colourful wings catching the light as they fluttered in small clouds.
She stopped to look up, joining a group of people who were already there, talking excitedly and filming the diaphanous kaleidoscope overhead.
Painted Lady migration
The Painted Lady (Vanessa cardui) butterfly migrates all over the world, notably moving northwards between April and June of every year.
This year, Iran's unusually wet climate - which caused unprecedented floods in typically dry areas of the country in March - encouraged increased vegetation that created a perfect habitat for the Painted Lady. 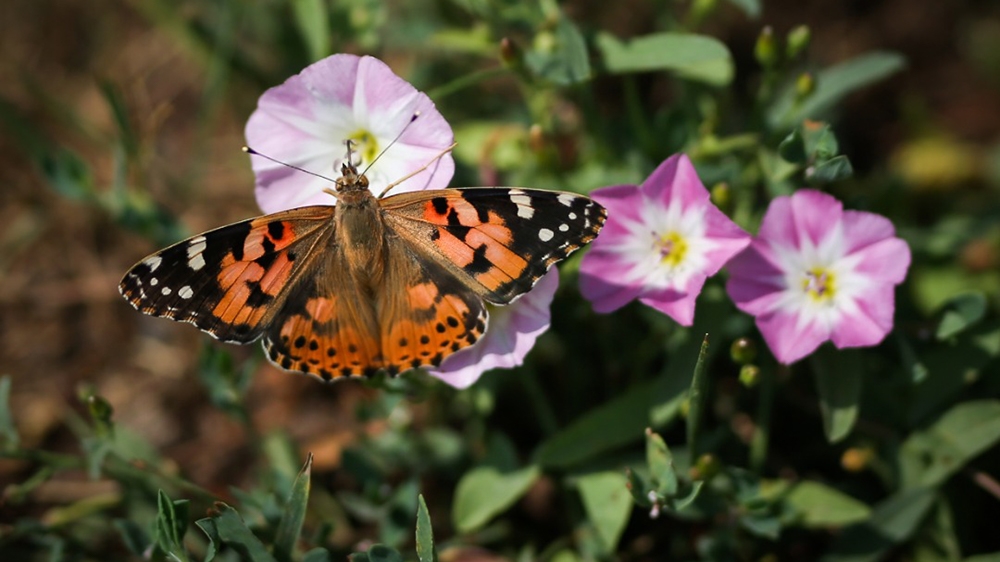 * * * Huge kaleidoscopes of the butterflies have been seen across Iran, from Sistan and Baluchestan in the east to Khuzestan and Hamadan provinces in the west. They arrived in the capital Tehran around 10 days ago.
Due to heavy rainfalls in #Iran over the past few months, millions of butterflies have flocked to the urban & rural parts of the Tehran province creating gorgeous scenes. According to experts, they're not pests, just gorgeous temporary guests in the Iranian capital. pic.twitter.com/baUT3pENfI
— Reza H. Akbari (@rezahakbari) May 17, 2019
Painted Ladies have also been seen migrating en masse in the United States and Israel.
Esmaeil Kahrom, environmentalist and researcher on biodiversity, attributed the presence of the Painted Ladies to the unprecedented rains.
"You might not see them next week," he told Al Jazeera. "Adult butterflies lay eggs and die. Their caterpillars will be born next year."
In Tehran, the butterfly migration helped elevate the public mood as tensions with the US rise and the future seems uncertain. 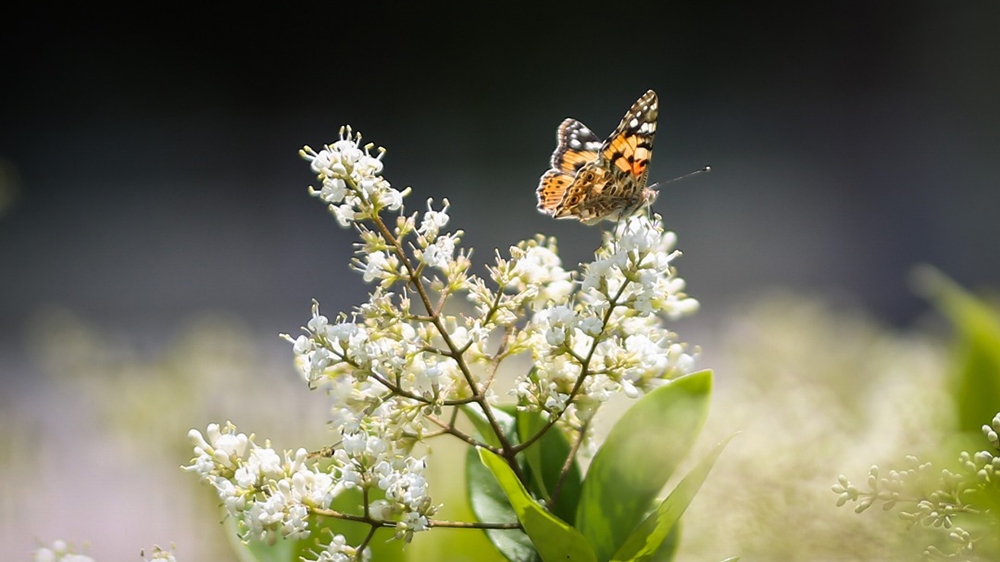 * * * Iranians uneasy
"Who doesn't have financial problems nowadays? With these prices, if you want to have any plan for your future, you need to put it away, next to all the other dreams you've had," Moghadam, 32, told Al Jazeera.
With rising inflation and a massively devalued currency, many are worried about how they will manage over the coming months.
The country's financial woes are partly as a result of renewed US sanctions targeting the Iranian economy, including its economic lifeline, oil. The sanctions were reimposed after the US last year unilaterally withdrew from the 2015 nuclear deal, which curbed Iran's nuclear programme in exchange for sanctions relief.
The US moves are part of its "maximum pressure" campaign to renegotiate Iran's nuclear programme, the country's missile programme and the presence of its armed forces in the region.
A series of incidents in the Gulf have heightened tensions, including the deployment of a US carrier attack group to the region, an unclaimed attack on four commercial vessels off the coast of the United Arab Emirates (UAE) and a drone attack on a Saudi oil pipeline, which was claimed by the Yemen-based Houthi armed group.
In spite of moderate rhetoric from both Washington and Tehran, ordinary Iranians are worried about the threat of war in addition to the economic woes they are preparing for. 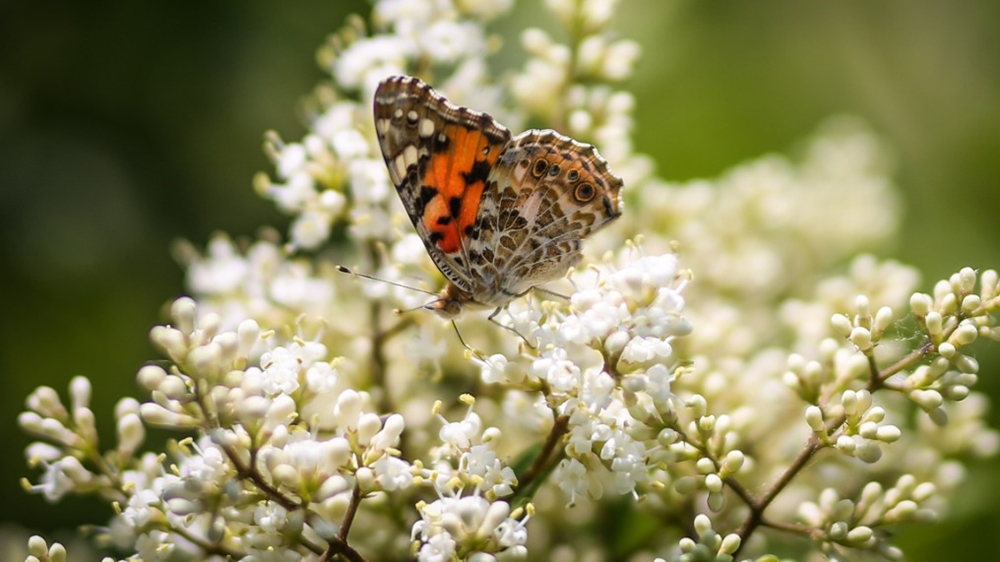 In Tehran, the butterfly migration has helped to elevate the public mood [Mohammad Ali Najib/Al Jazeera]

* * * For some Iranians, the threat of war has already had a mental effect.
"All of us are waiting for war. No anxiety is worse than waiting for your world to be destroyed," Moghadam told Al Jazeera.
'Ambassadors of hope'
Tehranites often complain of the city's grimness, owing mostly to air pollution, traffic congestion and drab concrete structures, but the Painted Ladies have brought some brightness to the capital.
"For me, it's as if a grey city takes on colours with the movement of the butterflies," Ali Mirshafi, a 25-year-old researcher of architecture and urban development, told Al Jazeera.
"These are the ambassadors of hope. When I see the butterflies, I think the [bad] incidents will soon pass. We endure the hardship together until a certain point. But this will be over in the end," he said.
Bahram Habibi, a Tehran-based photographer, says people have been looking at the natural phenomenon as a good omen.
"The beautiful nature of the butterflies has made them think that a wave of good happenings are coming towards us," he told Al Jazeera.
SOURCE: Al Jazeera News Schizophrenic Trump threatens Iran's 'end' if it seeks fight with the ...

aljazeera.com 20/05/2019 Politics
Just days after saying he was prepared for talks, United States President Donald Trump has issued a direct threat to Iran, suggesting that the Islamic...View Details»