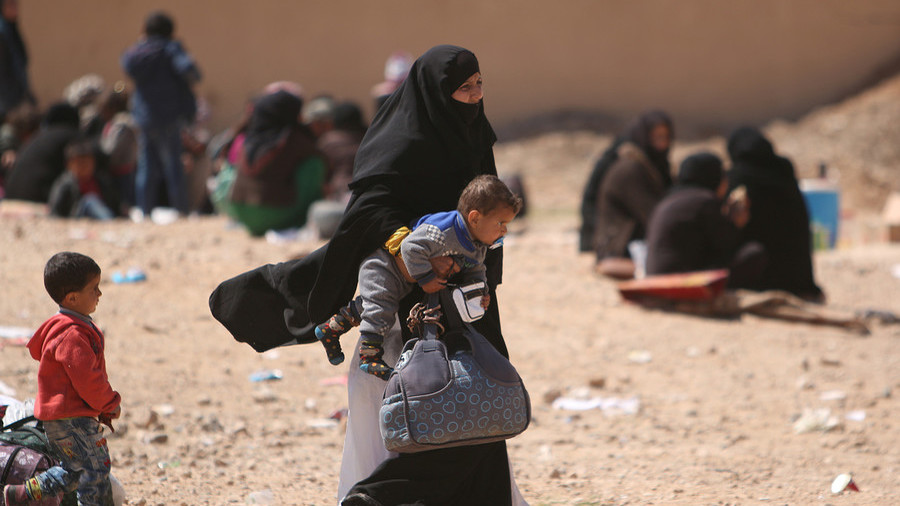 UK, US, and French bombs inflicted mass loss of civilian life in ISIS-held Raqqa, according Amnesty International. A new report has also accused coalition forces of bombing areas where they knew civilians were trapped.
During the four-month operation to eradicate the Islamic State (IS, formerly ISIS) in the Syrian city of Raqqa, the US-led coalition – which includes British forces – killed hundreds of civilians and injured many more, says Amnesty International.
According to its damning report into the coalition forces, residents were trapped as fighting raged in the streets between IS militants and the Kurdish-led Syrian Democratic Forces (SDF), who were supported by coalition airstrikes. Escape routes for civilians were riddled with IEDs, put there by Islamic State, which also positioned snipers to shoot those trying to flee.
The Hashish family lost 18 members, mostly women and children, over a two-week period in August. A coalition airstrike killed nine, while seven died as they tried to flee via a road that was laid with IS mines, and two others were killed by a mortar launched by the SDF.
“Those who stayed, died; and those who tried to run away, died,” said Munira Hashish. “We couldn’t afford to pay the smugglers; we were trapped.” Hashish said that she and her children eventually managed to escape through a minefield “by walking over the blood of those who were blown up as they tried to flee ahead of us.”
Senior Crisis Response Adviser at Amnesty International Donatella Rovera is calling on the coalition forces to launch an investigation into the bombing campaign that left Raqqa devastated.
“When so many civilians are killed in attack after attack, something is clearly wrong, and to make this tragedy worse, so many months later the incidents have not been investigated,” she said. “The victims deserve justice.
“The coalition’s claims that its precision air campaign allowed it to bomb IS out of Raqqa while causing very few civilian casualties do not stand up to scrutiny. On the ground in Raqqa, we witnessed a level of destruction comparable to anything we’ve seen in decades of covering the impact of wars,” she continued.
“IS’s brutal four-year rule in Raqqa was rife with war crimes. But the violations of IS, including the use of civilians as human shields, do not relieve the coalition of their obligations to take all feasible precautions to minimize harm to civilians.
“What levelled the city and killed and injured so many civilians was the US-led coalition’s repeated use of explosive weapons in populated areas where they knew civilians were trapped. Even precision weapons are only as precise as their choice of targets.”
Rovera added that the level of devastation and destruction in Raqqa is worse than anything they have seen in decades, quoting a senior US military officer as saying that “more artillery shells were launched into Raqqa than anywhere since the end of the Vietnam war.”
The Amnesty International report, based on 112 interviews and visits to 42 strike locations, has already been slammed by a coalition spokesman – even before it was published.
US forces fired 100 percent of the artillery rounds used against Raqqa and over 90 percent of airstrikes. British and French aircraft were also involved, with the UK’s Ministry of Defense admitting that Britain carried out 275 airstrikes. The UK claims that no civilians were killed as a result of their bombs.
The human rights group claim that there is strong evidence that coalition air and artillery strikes killed and injured thousands of civilians, including in disproportionate or indiscriminate attacks that violated international humanitarian law. Despite pledges that civilian loss of life would be thoroughly investigated by coalition forces, Amnesty says there is no sign of this happening.
Middle East Researcher at Amnesty International Benjamin Walsby has questioned why the coalition felt the need to bomb the city in ruins if “the coalition and their SDF allies were ultimately going to grant IS fighters safe passage and impunity.” He added: “What possible military advantage was there in destroying practically an entire city and killing so many civilians?
“Raqqa’s civilians are returning home to ruins, pulling loved ones out of rubble, and facing death or injury from mines, IEDs and unexploded ordnance,” Walsby said. “The coalition’s refusal to acknowledge its role in creating this catastrophic situation adds insult to injury.”
An MoD spokesman said: “Keeping Britain safe from the threat of terrorism is the objective of this campaign and throughout we have been open and transparent, detailing each of our nearly 1,700 strikes, facilitating operational briefings and confirming when a civilian casualty had taken place.
“We do everything we can to minimize the risk to civilian life through our rigorous targeting processes and the professionalism of the RAF crews but, given the ruthless and inhuman behavior of Daesh, and the congested, complex urban environment in which we operate, we must accept that the risk of inadvertent civilian casualties is ever present.”
US Army Colonel Sean Ryan has denied accusations made by Amnesty International of disproportionate bombing and unlawful killing.
“I think we served the people of Raqqa to the best of our ability and against an enemy that has used tactics that no one even suspected they would use,” Ryan said. “We’re the ones who liberated Raqqa and did it come at a price? Sure – but it's a time of war, and that's what happens sometimes. We go to extreme levels to avoid innocent civilians.”
--- ---
...

Only When We See the War Criminals In Our Midst Will the Blood Begin t... Meet The Man Who Funds ISIS: Bilal Erdogan, The Son Of Turkey's Presid...